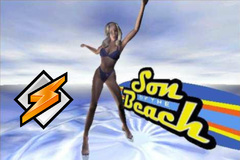 Dancing BJ Plug-in animates all the musical sessions made with Winamp showing on screen a young and attractive dancer who moves following the rhythm of each song that is played. The tonality of the girl's bikini that appears in the plug-in is customizable, as well as the visual angle with which the scene is visualized.

The Dancing BJ Plug-in system detects the rhythm of the hits that are played through Winamp, making the girl dance in a very realistic way. The whole scene is recreated in three dimensions.

Before the girl starts the movements you can modify the color of her suggestive bikini, as well as the angle with which the camera focuses on the skilled dancer.